The Blockers to Excellence 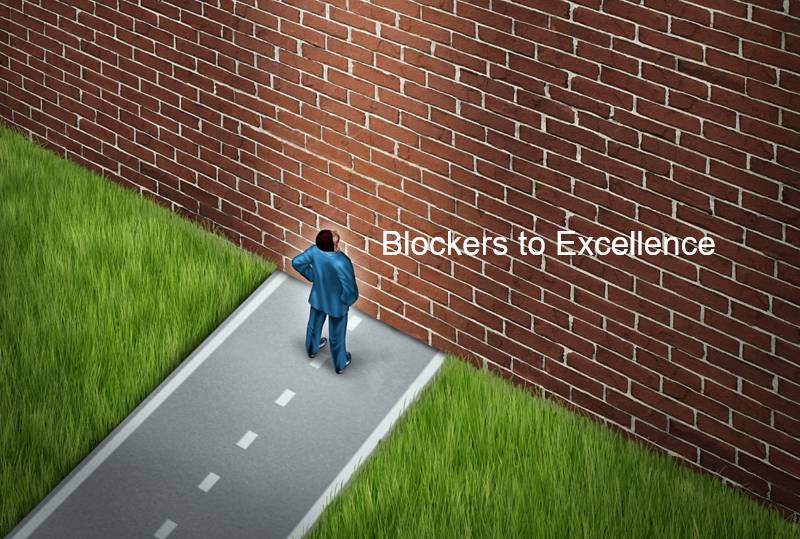 “We don’t’ take shortcuts, there’s no place for speeding up here.”

- I’m not asking anyone to speed up.

I’ve lost count of the number of times I’ve heard this from the leader of an organisation.  Our company has presented to an organisation on the ‘why, how and what’ of a performance improvement program, whereby I am met, in return, with this mindset.  The apathy.  This blocker.  They quite simply don’t get that I’d prefer they work smarter, not faster.

How about “….Yeah, we’d love to get into this stuff, but we’re just too busy.”  That old chestnut, too busy being busy.

We met a potential client, the director wondered, “Why would I employ a program like this.  We are one of the leading companies in this industry?”  He countered that he didn’t see the value of what he perceived would be just incremental gains.  He was saying, in essence, ‘too good to be better’.

Wouldn’t one want to reduce waste?  Streamline productivity?  Stop gilding the lily?  Increase quality?  Realise an incremental gain on a £50MM project?  Just because one is performing well shouldn’t mean one can’t aim for greater results.  Being busy is no excuse to block performance initiatives.

Support and direction can suffer on two levels.  Great ideas are generated, but the wrong champion is chosen.  The champion has neither the horsepower nor authority to drive the process.  Or – we just don’t get the commitment to the promises made by the stakeholder.

We just worked with a client recently – we received the execution program.  It was, quite simply, massive.  The longest we had seen.  A comment from the client’s leadership was that the author had put an enormous amount of work into the program.  No kidding.  There are reasons for standardisation and optimisation.

Many organisations want to change, want to improve, but want to choose what processes or tools to apply.  Separate teams within a group can work on their own processes.  Value drivers get mixed.  Everyone wants to do a good job, but what does the MD really want?  Is the vision aligned?

I went to a client and asked the team if it had an after action review process.  The lead engineer took me to a filing cabinet.  Opened the first metal drawer.  Inside were hundreds of A4 pages.  Each page had captures from AARs.  “Yeah, look.  Hundreds,” he said.  “Brilliant at capturing this stuff,” he informed me.  “Haven’t done a thing with any of them mind.”  If one has a tool or process, work it fully.

All too often, the crocodiles are snapping before the call for help is made.  Now the manager has to do something for the sake of doing something.  Focus areas aren’t framed properly.  We’re in catch-up mode.  “I want something, but I don’t know what I want,” is a common theme.

Seen this before?  Does any of this look familiar in your organisation?